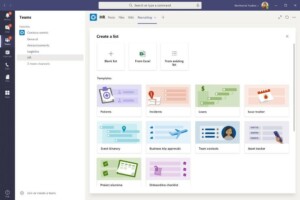 Microsoft Teams users will soon be able to work on their favourite lists from within Teams.

Create and edit lists in Teams

The new Lists app in Microsoft Teams brings lists in team SharePoint sites into the collaboration and teamwork canvas of channels and facilitates conversations around list items. The roll-out starts early September. As a result, by mid October all users will also be able to carry out all functions of Microsoft Lists (home) and SharePoint lists in Teams, including adding/editing columns, filtering, sorting, formatting, and exporting to Excel. The lists app also enables to create new lists from within Teams. Microsoft says that lists created using the Lists app and Lists created in SharePoint are identical.

Lists is pre-installed for all Teams users and is available directly in the tab gallery of every team and channel. Teams admins can control the availability of the app using app permission policies. Microsoft recommends to notify end users about the availability of the Lists App and to update end user training and documentation.

The past few months Microsoft announced and installed several new Teams features. End of July, Microsoft rolled out Tasks to better visualize individual tasks and team projects within Teams. That same month, the video chat application also launched in a new meeting experience. Some of the added functions are pop-up windows, an expansion up to 49 persons, virtual spaces to freshen up meetings, an app to take notes and a focus mode.